What are you looking for?

PLEASE NOTE: Live Bee Hive orders received from now, will be dispatched in early spring. You can still order via the website direct deposit $50 into my account to secure your hive. Thanks for your understanding 🐝

Yesterday Melissa Ballantyne from Sydney stingless bees visited LMFDC to show the children how to split a bees hive. Pete our coordinator from Wesley Mission Queensland also joined us for this very special experience. Melissa asked Oliver, Mila, Wilder and Alex who would like to put the beekeepers net on. Mila and Oli were keen to try this whilst Alex and Wilder decided they would prefer to watch. Melissa and Mila used a splitting tool to split the first hive. When the hive was split you could hear it crack. Oliver used the splitting tool with Melissa to split the second hive and this also made a crack when it was split.

Melissa explained that now she has removed the beehive that all the bees are flying back to the beehive casing looking for their hive. Melissa explained “the brood chamber which is a magnificent swirl of thousands of small cells about the size of small match heads is where the queen will lay her larvae. The brood chamber is about the size of a large mango and sits in the centre of the hive. Surrounding the brood chamber are hundreds of honey and pollen cells that are randomly placed in the cavity of the hive. These cells are about the size of small grapes.”
Melissa asked Mila, Wilder, Alex and Oliver if they would like to try some honey. Alex, Oliver and Mila were very keen and Wilder said no. We asked Wilder that he might just want to dip his finger in to try it and he agreed. The children thought the honey tasted yummy! even Wilder.

It was now time to put the hive back together to make 2 separate hives. Melissa then placed a full top [hive] to the empty bottom [hive] and the full bottom [hive] to the empty top [hive] and strapped it around the hive to help reseal the hive. Melissa placed the hive back into the casing so the bees can go and pollinate our garden. All fruit and vegetables are pollinated by native bees including macadamias, avocados, watermelon, citrus fruit and mangos.
We are now lucky enough to have 4 beehives at LMFDC. These were all generated from the 1 original hive that we put in last year.
— with Melissa Ballantyne. 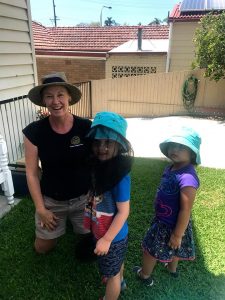 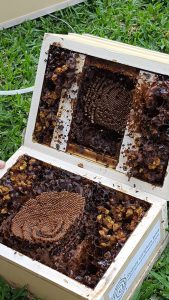 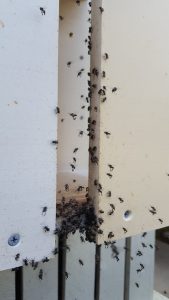 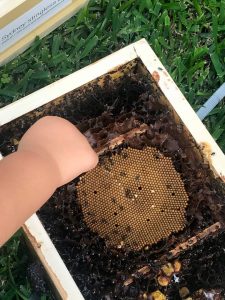 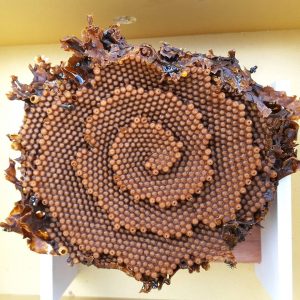